One of the things I see many software developers use is a Mac. Even at Microsoft's own Build expo, you can see presenters use macOS to use Microsoft VS Code. This puzzled me a bit, so I did some digging. For the most part, a Macbook is an all-in-one package for a decent laptop that runs on linux. This gives them access to various linux tools easily accessible using Terminal (bash), rather than Command Prompt. It's the linux experience on a decent laptop.

So this got me interested. Having been a Windows user since pretty much forever, this would be a new experience and would breathe new life into how I interact with computers. Also if I were ever handed a company Macbook I wouldn't be puzzled of how to use it.

I don't personally have a Macbook and I wasn't going to spend a thousand dollars on getting one either. So the alternative was to run Hackintosh - running macOS outside of Macbook hardware. I own a a Dell XPS 13 9350 and luckily for me there have been many users running Hackintosh on this laptop, and so there is quite a bit of support for it, especially over on tonymacosx86. My specific hardware looks like:

There was just one problem with my setup: there was no support to get the DW1820A card to work on macOS. However, there are alternative cards that work like the DW1830 and the DW1560. I picked up a DW1560 card on eBay for around $35 CAD. Make sure that the card has the right connector.

A USB was also needed to install macOS. I used some 16GB one I had lying around. One thing that it had that really helped me out was its LED indicator, which we will discuss later.

The main guide that I followed was on from ZombieTheBest on Github: https://github.com/ZombieTheBest/XPS9350-10.13-HighSierra

This was a fork of one by syscl, which I tried but couldn't get the proper keyboard and WiFi drivers.

The guide is good, but not appropriate for beginners. Beginners ought to google each of the steps independently to get a feel of what the process is and some of the nomenclature for Hackintosh builds like 'kexts', 'DDST', etc.

Create a vanilla installation disk (USB or other removable disk). (Google how to)

This step involves just installing macOS into a USB.

Install Clover with UEFI only and UEFI64Drivers to the installation disk just created.

Clover refers to the Clover EFI Bootloader installer. This software allows the PC to boot into macOS.

This copies 'ACPI Tables' to the EFI paritition on the USB. The LED indicator on my USB helped here to show that I was actually writing to it. It took about 20 seconds to complete. The files can be found in /EFI/ACPI/origin.

Replace the original CLOVER folder on the SSD with the one from the USB drive under my Git/XPS9350-macOS/CLOVER.

Note: If booting into the macOS installer fails with an error such as Waiting for root device (verbose output needs to be enabled first when booting), then we need to add USBInjectAll to our kexts under CLOVER/kexts/Other. This happens because we need a USB driver.

I used macOS for about 2 days before I switched back to Windows 10. Don't get me wrong, macOS: 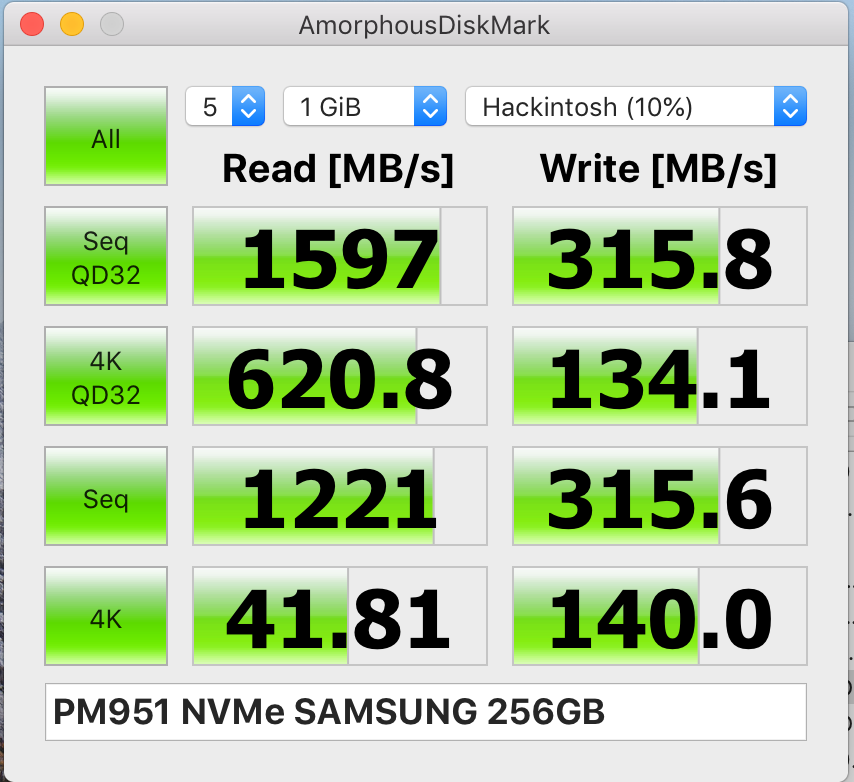 But there were some drawbacks as well:

Most of the issues I had was compatibility with my hardware. Sure macOS was great, but the interfacing experience was terrible compared to Windows. This became my dealbreaker and I just couldn't stand the experience any longer. I write this blog on my reverted Windows machine and input, as far as I can tell, is flawless. Installing the linux subsystem so far gives pretty good linux integration. Who would have thought that using hardware with its intended software would be so good?